Prior to training in Plastic Surgery at UCSF, Dr. Grossman completed a full five year residency in General Surgery, also at UCSF, and was certified by the American Board of Surgery. 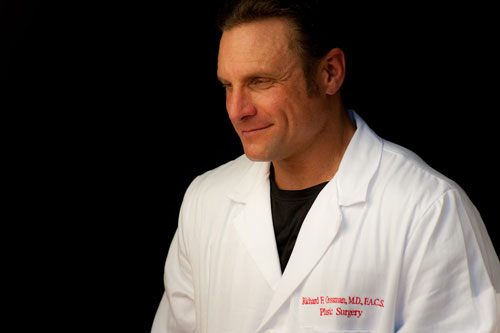 Dr. Grossman began publishing scientific papers in peer-review journals in the field of Plastic Surgery while he was an undergraduate and Benjamin Franklin Scholar at the University of Pennsylvania (Penn). While an undergraduate at Penn he was particularly honored to serve as a teaching assistant in the Graduate School of Medicine, mentoring the work of scholars many years his senior. He continued research and publication while remaining at Penn for medical school, then spent an additional four of nine years total in General Surgery training at UCSF performing clinical and basic science research, including an endocrine surgery visiting fellowship at the National Institutes of Health (NIH). His CV shows the many journal articles and book chapters in varied fields in addition to Plastic Surgery that were the fruits of this academic labor.

Dr. Grossman began his post-graduate practice with nearly a decade of experience in general reconstructive and aesthetic plastic surgery, with a focus on reconstructive and aesthetic surgery of the breast. For the past six years, he has been an attending Plastic Surgeon at the ABA-verified burn unit at St. Francis Memorial Hospital in San Francisco. There are only nine burn centers in the State of California that have earned ABA verification and for most of Dr. Grossman’s six-year tenure at the ABA-verified center in San Francisco, Dr. Grossman has been one of only two attending Plastic Surgeons on the burn unit staff. As a result, he has been privileged (and sometimes quite exhausted) to perform over 1,200 major burn surgeries to date on patients ranging in age from one day to over 100 years old. He saved and transformed many lives, and enjoys a level of satisfaction with his work that he did not imagine ‐ but should have ‐ when he was around 5 years old. As a child, he used dissection instruments his mom saved from her high school biology class, so he could practice the surgical extraction of yolks from eggs his mom hard-boiled for him to operate on. Dr. Grossman’s intrigue and satisfaction with the practice of Plastic Surgery have grown steadily ever since.